Confession, until Wednesday night, I had never tried asparagus. Ok, maybe as a child, but I don't remember so it doesn't count. Truthfully, I have issues with most veggies. Something about the greeness or texture I find gross. I'm really trying to get over this so I'm making a huge effort to try all the veggies I claim to hate.
We decided to have steak and potatoes for dinner which would naturally be served with a veggie on the side. Since asparagus was on sale I thought I might as well give it a try and into the cart it went.
Steaming it would have been a really bad idea for me. I can usually swallow a few pieces of something raw but steam it and NO WAY. Roasting seemed like a good choice so I tossed the offending veggies with olive oil, salt, pepper and roasted at 425 deg. Sadly, I actually had to ask my husband to tell me when they were done which I think was about 15 minutes n the oven.
On my plate- a slice of steak, huge potato and a few very scary asparagus stalks. I forked one, told myself I was going to like it and chewed. It wasn't so bad. I didn't oooohhh and awe about the deliciousness I had been missing out on all the years but I didn't gag either so this is progress.
Next up- I'm thinking eggplant, but we'll see. 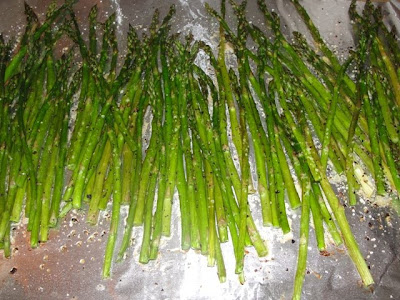 Posted by AllThingsYummy at 11:18 AM