Yesterday I had family and friends over for a BBQ to celebrate my birthday. Another year older, how does time go by so fast? I spent the morning making dolmas (which I'll be sharing in another post) and had very little time to make dessert. I had already had birthday cake during the week and since I was craving coconut I opened my trusty Barefoot Contessa cookbook and found this recipe. You can have these cookies ready in less than an hour. They are sweet, chewy and perfectly coconutty. Delicious. Everyone else must have liked them too since I have only a couple left in this morning. I'm hiding them for a snack later today with my new favorite drink, an Earl Grey tea latte. Has anyone else had one from Starbucks? I ordered one on a whim yesterday morning and it's so yummy. I bought the ingredients (milk, raw sugar, Earl Grey tea bags) at Trader Joes to make them at home since $3 for a tea latte is going to get expensive after a few days. 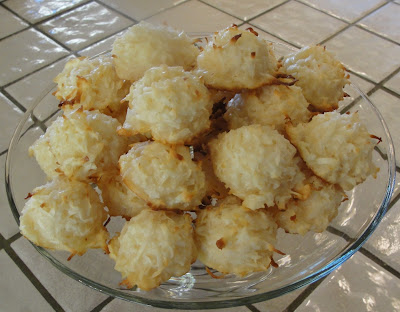 Preheat the oven to 325 degrees F.

Combine the coconut, condensed milk, and vanilla in a large bowl. Whip the egg whites and salt on high speed in the bowl of an electric mixer fitted with the whisk attachment until they make medium-firm peaks. Carefully fold the egg whites into the coconut mixture.

Drop the batter onto sheet pans lined with parchment paper using either a 1 3/4-inch diameter ice cream scoop, or two teaspoons. Bake for 25 to 30 minutes, until golden brown. Cool and serve.
Posted by AllThingsYummy at 12:16 PM