Knock You Naked Brownies- just the name alone made me want to bake them. It's like the Is It Really Better Than Sex Cake- a conversation starter and a delicious dessert. Especially after your friends have had a couple cocktails and they're extra chatty.
Fudgy German chocolate cake with a caramel, pecan, chocolate chip filling. Be prepared, especially if you're serving to kids, these are a gooey sticky mess...and if you find trails of caramel on your kitchen counters in the morning, you know they were good enough for family members to sneak a midnight snack. 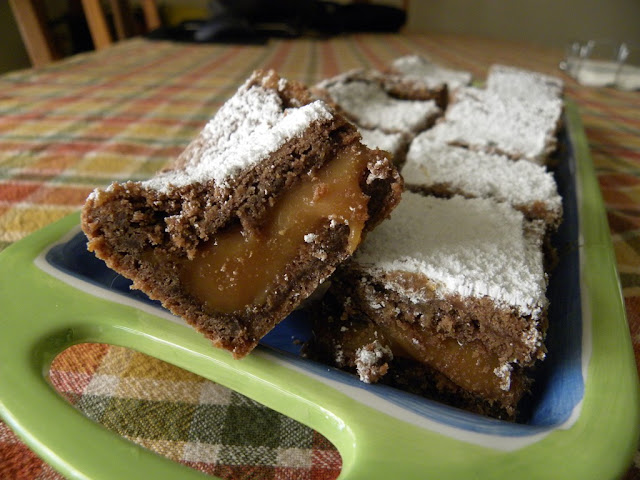 I left out the pecans since the BBQ they were for had people with nut allergies. 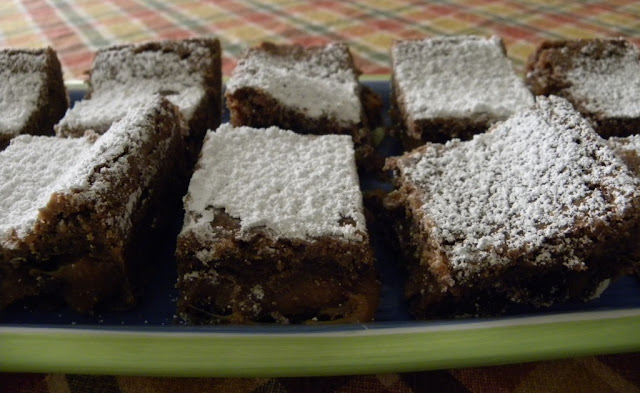 
Preheat oven to 350 degrees.
In a large bowl, mix together cake mix, chopped pecans, 1/3 cup evaporated milk, and melted butter. Stir together until totally combined. Mixture will be very thick.
Press half the mixture into a well-greased 9 x 9 inch square baking pan. Bake for 8 to 10 minutes. Remove pan from oven and set aside.
In a double boiler (or a heatproof bowl set over a saucepan of boiling water) melt caramels with additional 1/2 cup evaporated milk. When melted and combined, pour over brownie base. Sprinkle chocolate chips as evenly as you can over the caramel.
Turn out remaining brownie dough on work surface. Use your hands to press it into a large square a little smaller than the pan. Use a spatula to remove it from the surface, then set it on top of the caramel and chocolate chips.
Bake for 20 to 25 minutes. Remove from pan and allow to cool to room temperature, then cover and refrigerate for several hours. When ready to serve, generously sift powdered sugar over the surface of the brownies. Cut into either nine or twelve helpings, and carefully remove from the pan.
*Adapted from the classic "Knock You Naked Brownies" recipe, based on a dessert at the Salt Creek Steakhouse in Breckenridge. These brownies don't really knock you naked...but almost.

I now have some evaporated milk left that I don't know what to do with. Any ideas?
Posted by AllThingsYummy at 1:03 PM