Over the holidays, I heard about Pumpkin PopTarts and I became slightly obsessed with finding them. Each Target or grocery store errand had to include a search of the breakfast aisle for the elusive Pumpkin PopTarts. Did I ever find them? No. I was mocked my Smore Poptarts, Blueberry, Strawberry and Cherry Poptarts but Pumpkin could not be had. It's not as if I live in a small town. This is Southern California. The land of a Starbucks and Coffee Bean down the street from one another. So, in desperate need, I decided to come up with my own version. Which I did, a few months ago, and just now am blogging about it. Ooops. I was reminded of this because over the weekend I had some pie crust and pumpkin puree leftover so I made them again. Quite yummy but not as convienient as a taking one out of a box and toasting it in my handy dandy toaster. If the makers of PopTarts are reading this, I would love a box if you have any saved from Thanksgiving. I hear they are delicious. In the meantime, I will share my recipe with the rest of the Pumpkin PopTart deprived world.
You'll need 1 pie crust. I like the kind from Trader Joes, but any will do.
Mix together about half a 15oz can of pumpkin puree with 1/4 C brown sugar, 1/2 t vanilla, 1/2 t cinnamon and 1/4 t ground nutmeg. You can increase the sugar depending on how sweet you like it. I also added 2 T of almond meal to thicken the pumpkin mixture. Pour the mixture into the middle of a rolled out pie crust and fold over. Crimp to seal the edges. Paint an egg wash (1 egg beaten with a splash of water) on your pie crust and sprinkle with a little raw sugar. Bake at 425 until golden.
Yes, I realize this looks like a calzone, but I was too lazy to cut into squares. It tastes just a good and even better with a scoop of vanilla ice cream. 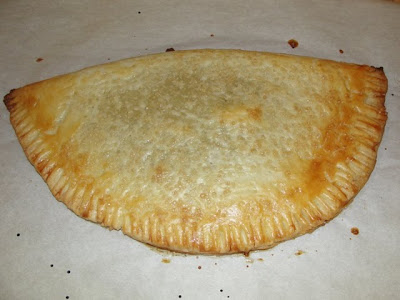 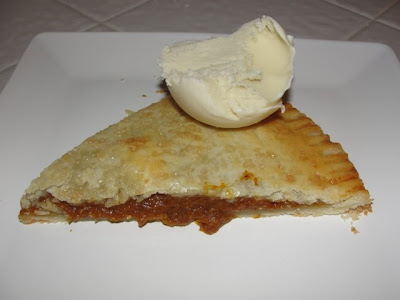 Posted by AllThingsYummy at 4:16 PM