I've made many versions of banana bread as I'm sure you've seen many versions of banana bread in the blog world. This recipe is my very favorite. It comes from Nigella Lawson's How to be a Domestic Goddess which is the first cookbook I ever bought for myself. I remember leaving Barnes and Noble so excited to get home and try her recipes. Like many of you, I'd rather sit up at night and read cookbooks rather than the latest bestselling novel. Although a good romance story can tear me away from the kitchen for a while.

If you don't like raisins you can omit them, but I would try it with them at least once. These are not your traditional dry chewy raisins, but plump, sweet and full of boozy warmth morsels of goodness. Hmmmm...I think I just channeled my inner Nigella with that description. 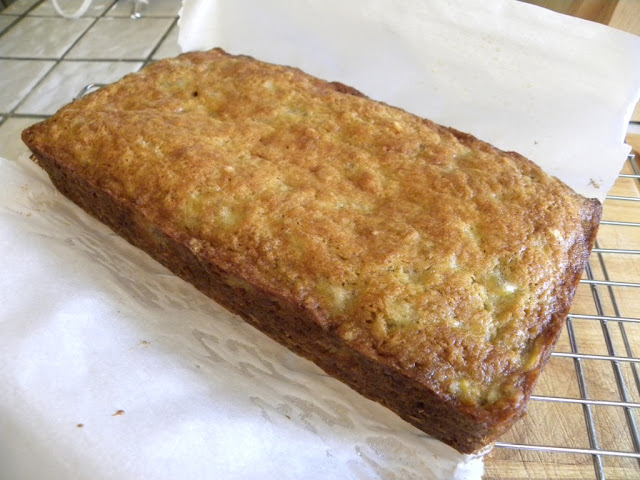 Put the golden raisins and rum or bourbon in a smallish saucepan and bring to a boil.
Remove from heat, cover, and leave for an hour if you can, or until the raisins have absorbed most of the liquid, then drain.
Preheat the oven to 325 degrees and get started on the rest. Put the flour, baking powder, baking soda, and salt in a medium-sized and, using your hands or a wooden spoon, combine well. In a large bowl, mix the melted butter and sugar and beat until blended. Beat in the eggs one at a time, then the mashed bananas. Then, with your wooden spoon, stir in the walnuts, drained raisins, and vanilla extract. Add the flour mixture, a third at a time, stirring well after each bit. Scrape into the loaf pan and bake in the middle of the oven for 1 to 1 1/4 hours. When it’s ready, an inserted toothpick should come out cleanish. Leave in the pan on a rack to cool, and eat thickly or thinly sliced, as you prefer.
Makes 8-10 slices.

What was the first cookbook you ever bought? Do you still have it?
Posted by AllThingsYummy at 12:34 PM